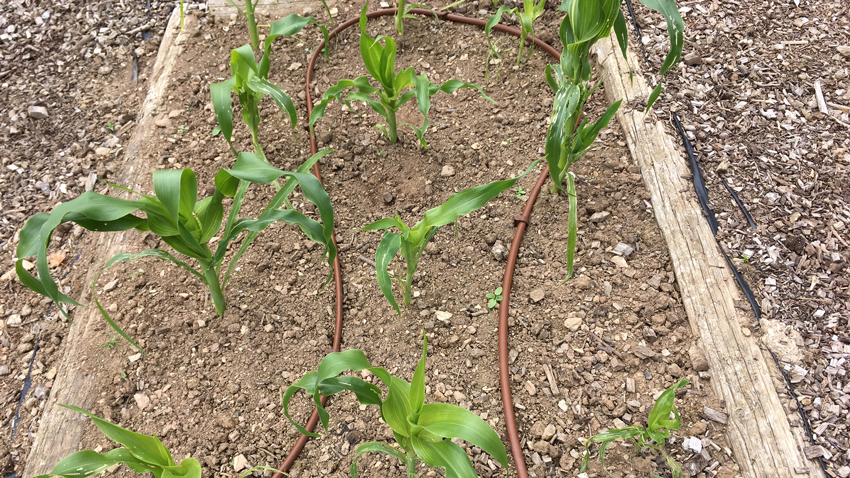 Right, I’m off on hols for three weeks. (Lucky me!) I’m leaving my veg patch in the capable (?) hands of my next door neighbour. So basically it’s not going to be weeded or tended to for 3 weeks, apart from some watering.

I felt too guilty to ask her to water it without putting in some sort of irrigation. During the hot spells last month it was taking me about half an hour to water the whole patch with the garden hose, and I thought it was a bit much to ask someone to take 30 minutes out if their day to splash some water on my plants. So, I looked into clever ways of watering the veg patch in a more easy way.

First off I tried drilling holes into the lids of water bottles, filling said bottles and then planting them in beds. It got off to a good start but after a few days the holes clogged up or I found they ran out too quickly. So that was a no go. I looked at some clever little nozzles that you can attach to the bottles as well, but they didn’t seem to be very good either.

Then I moved on to the idea of a water butt with drip hose attached. But the size of my veg patch would have meant 3 or 4 water butts and it didn’t seem the best idea. In the end I decided to invest in some drip line which is now attached via hozelock connectors to my old style outdoor tap. I’ll be honest, I didn’t enjoy installing it at all. There was a lot of cutting to size and trying to connect one hose to another, and what I thought would be a 20 minute job became more like 2 or 3 hours in the scorching heat of the midday June sun, but once installed it behaved well. The drip line has small holes every 30cm and, as the name suggest, water drips out slowly and steadily. It’s a lot more water saving than just spraying the hose around, and also   means I don’t waste so much watering places that don’t really need watering whilst running to turn the tap off etc.

So far so good, and the  best thing is my neighbour can simply turn the tap on, then go and grab her supper etc before turning it off again. Much easier. No doubt it’ll rain for the next few weeks, but it’s there if she needs it!