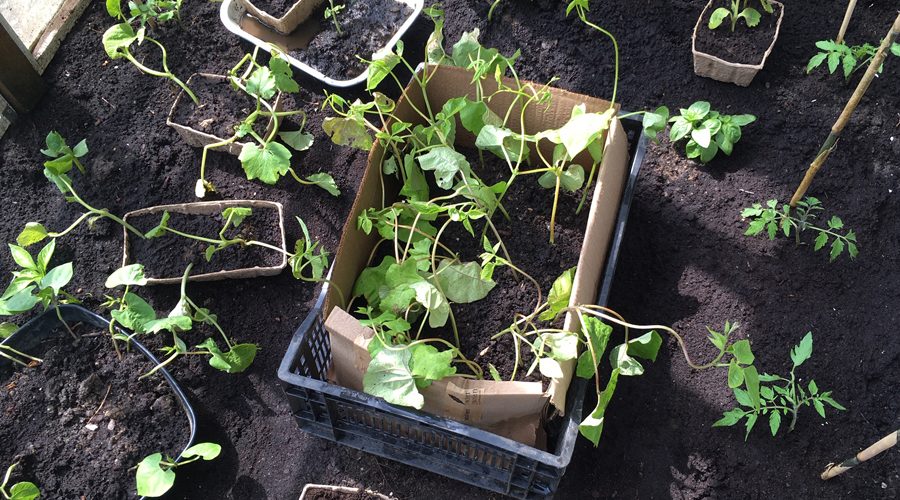 Well, my poor beans and squashes have had quite a time of it over the past few days. They arrived on Friday last week, and I planted them out on Saturday. It was a warm, sunny day, and it had been pretty warm for a couple of weeks, so I thought they would be safe.

Little did I know that there were 50mph winds coming in from the east in a few days time. Easterly winds are always a bit nippy, and at that strength veg plants can really suffer. When I did see the forecast, I put a sheet of clear polythene around the bean plants, using clothes pegs to clip it to the bamboo bean supports. I thought the squashes would be ok.

When the wind reached 25/30mph, the polythene started to blow off the bamboo supports, so I went for plan B. I took the polythene down, and covered the squashes with it instead. Then I pulled up my beans and planted them in compost in an old roasting pan and put them in the greenhouse. They were looking a bit battered by this stage. I am happy to report they look a bit better today!

Meanwhile, the squashes stayed outside under the polythene to weather the storm as winds reached 50/55mph. What I hadn’t considered was the rain. It bucketed down, and formed puddles on top of the polythene. These puddles didn’t always form in the best place, and I found several casualties the next morning. I removed the polythene and let the poor plants get a glimpse of sunshine, but it was still chilly for them. Then I heard that there was a cold spell coming in from the north, so I decided to pull up the squashes too, and they are now hanging out with the beans in the greenhouse.