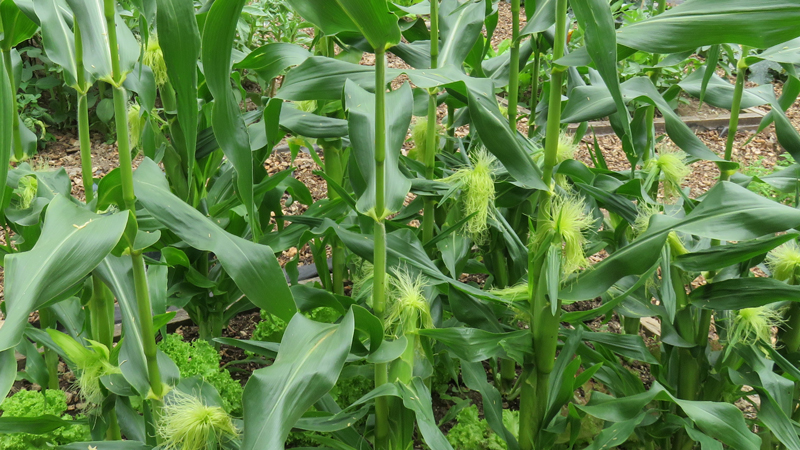 There is nothing quite like homegrown sweetcorn. It tastes incredible and is WAY better than anything you’ll ever buy in the shops. It’s also wind-pollinated so you need to give it a helping hand.

When you plant your sweetcorn plants, be sure to plant them in blocks rather than a single row. For example, plant 3 parallel rows of 3 sweetcorn plants making a square block. This is really important as sweetcorn relies on the wind for pollination. This planting method makes it much more likely that your corn will be pollinated so that you’ll get fully developed corn-on-the-cobs. Without successful pollination you’ll find that when you peel back the leaves of your corn there will be very few juicy, yellow kernels inside, just a disappointing, bare-looking husk.

Plant sweetcorn outside in a bed (leaving 40cm between plants) once all risk of frost has passed. (If you receive your plants while there is still a risk of frost, plant them in a pot or grow bag and grow them undercover for a few weeks.) While they are young you need to keep them well watered. Once they’re established you just need to water them during dry periods. Use an onion hoe to keep them free of weeds, or plant a few lettuces in between plants to act as ground cover. If they’re in a windy spot, earth them up a little to help them stand up straight.

You can usually harvest sweetcorn in late summer/early autumn. At this time, watch out for the tassels on the end of the cobs turning from blonde to light brown to dark brown. As they get darker you can test to see if the corn is ready for harvesting. Peel back the leaves on one of the husks until you reveal a few corn kernels. Press into a kernel with your thumbnail and look at the juice that comes out. If it is clear you need to wait a few more days so cover the cob up with its leaves again. If it is a creamy, milky colour then you’re good to go! Pull the cob downwards to harvest it – it’ll snap off at the stem.

It’s worth eating your sweetcorn as soon as you possibly can after harvesting as it loses its lovely sweet flavour so quickly. If you don’t believe us do a taste test later this summer – pick 2 cobs on the same day and eat one of them within half an hour leaving the other for a day or two in the fridge before eating it. You’ll soon see what we mean!

A word on baby corn…. Baby corn is slightly different to traditional sweetcorn in that you eat the entire husk and you actually don’t want it to be pollinated. For this reason, plant Minipop Baby Corn in a single row to try and minimise pollination. You can plant them a little closer together, leave 20cm between plants. Harvest baby corn when they are about 7-8cm long before the tassels turn dark.