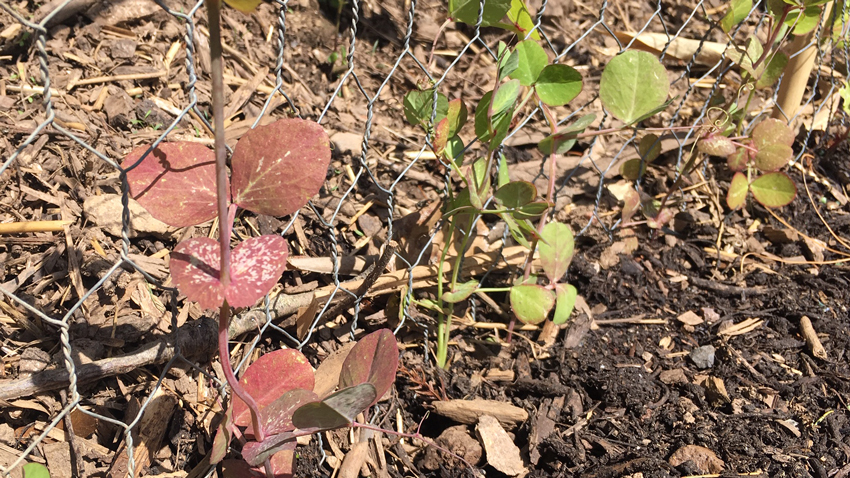 Last week I planted out my pea and mangetout plants. They have a nice raised bed (no dig) with a good layer of fresh compost, and they’re climbing up some chicken wire. All in all, I thought they were in for an easy life. However, a few days after planting them I noticed that the leaves were starting to go a bit purple around the edges, and then a couple of days later the majority of leaves were purple throughout. As I’m slightly obsessed with my veg plants, I got straight on to google to find out what was going on. It took a while, but eventually I found out about phosphorous deficiency (incidentally, most of my google searches returned examples of mineral deficiency in cannabis plants and very few returned examples of mineral deficiency in vegetable plants – it seems far more people are growing cannabis than are growing vegetables, but hopefully Rocket Gardens are helping to restore the balance!)

What I was confused about was that the peas were planted in fresh compost, and yet still had phosphorous deficiency. It didn’t make sense to me – surely fresh compost would be full of all sorts of minerals? Further investigations revealed that cold weather can cause phosphorous deficiency. Well, that explains it – we had a bitterly cold wind last weekend and a frost on Sunday night. I know this because I was on a camping trip and had on an abnormal number of layers as well as a woolly hat and was still shivering.

So, this is yet another victim of cold weather in my veg patch this year – so far, my beans have struggled (too windy for them, I actually think they got wind burnt and I’m not convinced they’re going to recover), my squash have struggled (frost bite I think – I’ve lost 3 so far), and my peas have struggled (phosphorous problems). Note to self, don’t plant out too early next year – late May is a safer bet (or plant out but protect plants with fleece). I’ve never actually planted out until 3rd week of May before, but I got a bit overexcited by the amazing weather we had at Easter so went for it. Oops!