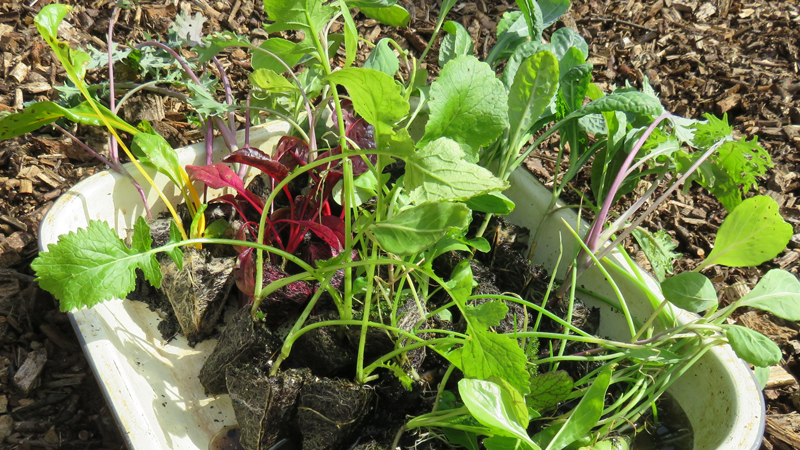 October is something of a changeover month in the veg patch. It’s the time when all the remaining summer crops are harvested and cleared away, and the last chance to plant veg to grow over the winter.

You may well have some tomatoes and peppers ripening in the greenhouse, and depending when you planted them you might still be harvesting beans, but they’ll probably be over soon, and once they are it’s important to clear up both the foliage and the  supports (the foliage can go on the compost heap, and the supports should be popped away somewhere cool and dry for the winter so that they don’t rot or deteriorate).

Root veg like carrots and beetroot are worth lifting now if you haven’t already done so, as are potatoes. Be particularly careful to dig up ALL your spuds, as any that are left in the ground are likely to spread disease next season.

Pumpkins and squashes will be ripening now so keep an eye on them and harvest them as they are ready. Again, clear all the foliage afterwards. The likelihood is that you will have some powdery mildew on squash leaves, so it’s best to burn this rather than composting it.

If you’ve got spinach and chard on the go, keep picking the leaves off so that you get more from each plant and to prevent them from bolting.

In the world of fruit, now is the time to harvest any remaining apples and pears. A good excuse for a warming crumble with plenty of custard or clotted cream!

Whilst all that is being harvested, it’s also time to get planting. Winter brassicas, salad leaves and lettuces are all ok to be planted while it’s still relatively warm. Using horticultural fleece to create a barrier against pigeons and other pests is a good idea for the brassicas in particular.

You won’t be planting fruit plants until next month, but it’s worth having a think now about what you might like to grow and where you’ll be planting it.