Here in Cornwall it has been surprisingly dry for the past few weeks. We’ve had the odd day of rain but for the most part it’s been fairly sunny. It doesn’t look like there’s much rain in the forecast either. It’s easy to assume that the best course of action in a dry spell like this is to water your veg plants every day to make sure that they don’t dry out, but sometimes this isn’t actually beneficial. 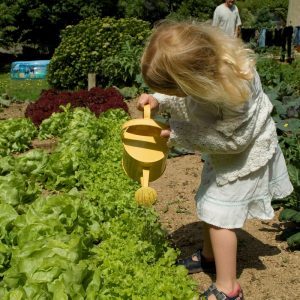 As a general rule, watering well but less frequently (every 10-14 days is often advised) is a better approach. You want to get all that water to go down nice and deeply into the earth. The plants then put their roots down more deeply, and this makes them stronger as they grow. So what you want to achieve when watering is giving the plants enough water that it reaches a foot or so under ground, rather than giving them a little water that only reaches an inch deep. How can you tell? Get the garden spade out, dig down and see how far below the surface there is moisture in the soil.

Not all plants are the same of course, so it’s worth taking into consideration their individual needs.

Courgettes, squashes and pumpkins, and sweetcorn don’t like to dry out.

Tomatoes and aubergines should not be allowed to dry out.

Not so thirsty plants:

Root veg like potatoes, beetroots and carrots don’t need as much water.

Leeks and onions will do well without too much watering.

Brassicas as a general rule will tolerate dry spells and only need watering from time to time.