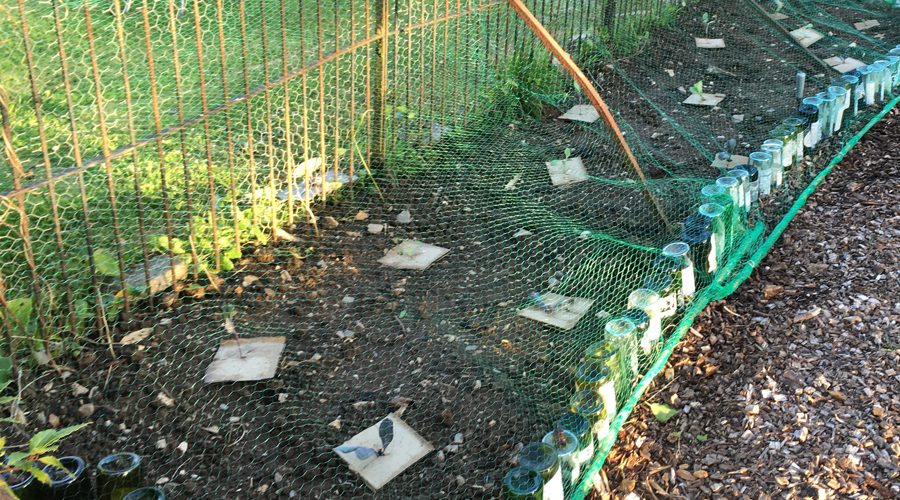 Over the past few years I have tried various different types of netting to protect my crops. Some are definitely better than others, not just at keeping pests out, but also in terms of not harming other creatures, particularly birds.

Spoiler alert – Insect Mesh Netting is my favourite and what I would happily recommend to anyone. Frustratingly, most garden netting/fleece is made from some kind of plastic and I haven’t yet found a good and long-lasting alternative. So for me, this is a compromise that I have been willing to make. 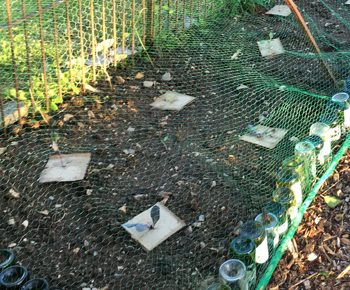 This kind of green/black netting (also referred to as anti-bird netting or anti-butterfly netting) is not my favourite. I used it to protect brassicas from pigeons and butterflies in my 2nd year of growing veg and I really regretted it. The 1-2cm holes are designed to let bees in, but to keep butterflies out. But it ripped easily and the butterflies soon found their way in and laid their eggs all over the brassicas. I even caught some laying eggs from the other side of the netting, where the leaves had touched the net. So it wasn’t very effective. For me the worst thing about this kind of netting is how easily garden birds get tangled up. After the 3rd occurrence of this happening I took it down.

This was my second pest-proof purchase and I preferred it to the first. However, it has its limitations. It is very lightweight and I’ve found that a few wet, windy days can damage it quite easily, so not ideal if your plot is somewhat exposed. Where I find it very useful is in protecting young plants in cold weather at the start of the season, and in protecting carrots from carrot root fly. The fleece can be laid on top of the crops and secured at the edges with heavy stones, and since it is close to the ground it doesn’t blow around so easily and remains more or less in tact. I wouldn’t use it to protect taller crops though. 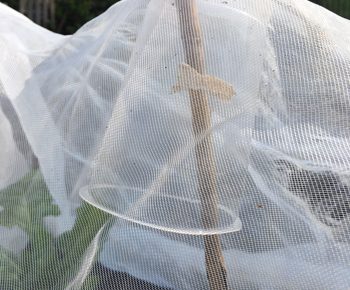 This is something I invested in 2 years ago, and I’m really happy with is. There are different brands out there, and Enviromesh is the most popular go-to. However, look for similar alternatives as there are loads and they usually come in a bit cheaper. I like it because it keeps the butterflies and pigeons off my brassicas really well, and as long as you are careful with it it doesn’t seem to get damaged. I think I’ll still be using the same mesh in about 10 years time. It allows the light through, and rainwater easily gets through too. It’s not good for mature plants that need to be pollinated though as bees can’t get in.

This is the stuff that building sites use on scaffolding. It’s often available in garden centres too as a screening or as veggie netting. A lot of people use it for brassicas, and many use it as an effective windbreak. My neighbour offered me some, but I politely declined as I am very happy using my insect mesh net! 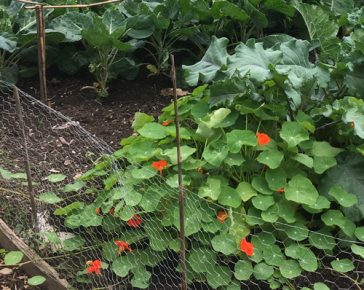 I’ve included this as I’ve found it really useful in 2 instances in the veg patch – firstly for creating a rabbit proof fence as you can easily put up a makeshift fence using 50cm long bamboo canes and a 40cm tall stretch of chicken wire. It’s not the most amazing protection, but only the most persistent bunnies seem to bother trying to outsmart the fence – the others, I find, make do with the acres of grass and weeds on their side of the fence! Secondly, for building a fruit cage to keep birds from eating all your lovely fruit – they don’t get tangled up and it’s pretty easy to make with a few sturdy posts.