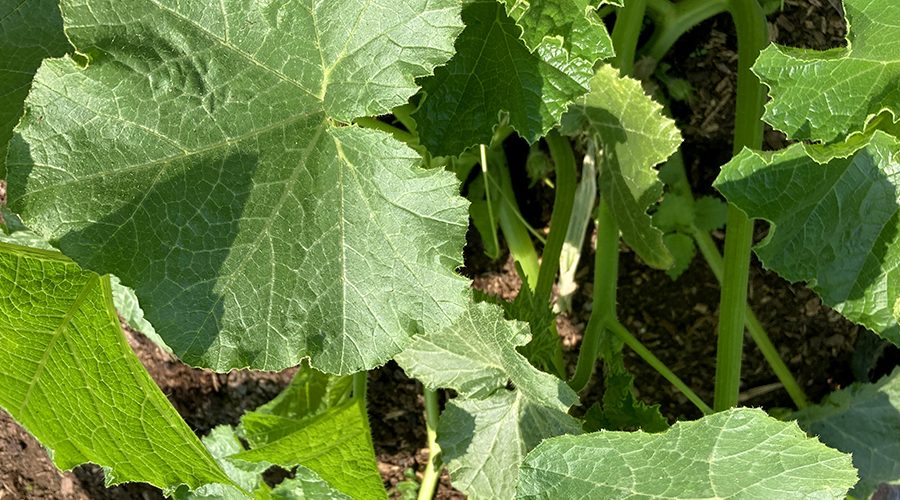 Normally by late July, I see any number of fungal problems with the leaves of various vegetable plants. Some of the more common issues in my vegetable garden include the following:

It’s so noticeably different in my garden this year, and I’ve been mulling over why that might be.

My original thought was that it has been quite dry these past few weeks – or has it? While the rest of the country was boiling in a heatwave, my own little corner of Cornwall got a couple of sunny days and then several days of Cornish Mizzle (somewhere between drizzle and mist.) I would have thought this warm, humid weather that we had would have been the perfect climate for blight and mildew, but everything is still looking good.

Ruling out the weather, I also realised that I haven’t been watering much this season – I really haven’t. I watered while the plants were very young, and then, in all honesty, I just got a bit lazy this year and I didn’t water very often at all. I would say that since mid June, I have probably watered the plants twice, maybe three times. That’s unreal! But, I think this may be a big contributing factor in the health of the plants – without watering as often, the leaves have not been getting wet or staying damp, and the top of the soil will have been largely dry as well. I think what this has done, is encouraged the plants to put their roots down deeper into the ground for water, whilst leaving the surface and leaves dry, giving fungal, spore-driven diseases less chance to take hold.

I’m not suggesting that everybody neglect their vegetable gardens by the way – please, keep watering!! My theory is that I have only been able to get away with it because I have mulched so heavily with compost. When it rains, the water soaks through the mulch and into the fairly clay-heavy soil underneath, and the plants are able to access this. Meanwhile, when it is dry, the mulch protects the moisture and prevents it from evaporating as quickly. I think that is right, but without doing a compare and contrast test, I’d be wary of proclaiming this to be a fool-proof system – still, I have saved a lot of water this year, and my plants are looking good, so something is working!

Powdery mildew is a fairly common issue for courgettes, squashes and pumpkins. It starts to affect them in late summer and is not something to worry about. The leaves will…

Potatoes are quite prone to fungal diseases like blight. If yours have been affected you can still usually harvest your spuds, so don’t panic. But you will need to take…

The sudden damp and mild temperature that we’ve had in the last few days in Cornwall is perfect for the development of fungal leaf spot like the ones pictured here….