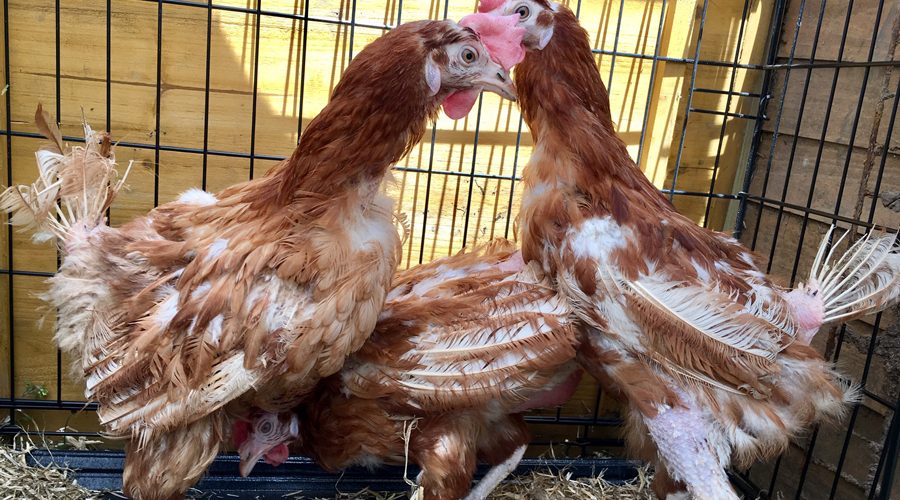 This is a little off topic, but I thought it would be of interest to many of Rocket Gardener’s customers, as having hens is right up there with growing veg part of living the good life.

18 months ago, I went to collect some “retired” hens from one of the British Hen Welfare Trust’s re-homing days. In a nutshell, the BHWT swoop in to rescue thousands of commercial laying hens that are on their way to be slaughtered, and, through their pop-up centres across the UK, they find people like me who want to give a few of these hens a new home with a free-range lifestyle. These hens tend to be around 18 months old, and they are deemed un-productive as they no longer produce enough eggs – they only lay 6 a week, not 7. My hens came from an enriched-cage farm.

As you can see from the picture above, when I picked up my hens they were in a pretty sorry state. They were by no means in the worst condition, though, there were many that were even more featherless. My hens hadn’t experienced the great outdoors yet, and when I got them home they were suspicious and reluctant to leave the dog cage that I had collected them in. It didn’t take long though, and within an hour or two they were out and about, pecking away and enjoying their first taste of freedom alongside my other two speckled hens, who are just a few months older. They laid eggs the next day (and pretty much every day after that for the next year). 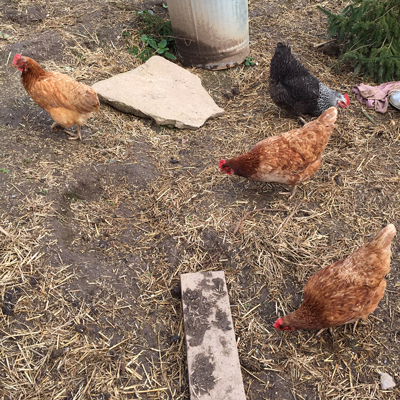 Within a few months, the girls had all their lovely new feathers and were looking much happier. Their characters shone through when they came to greet me in the morning, trampling over my feet whilst I prepared their breakfast. They often helped out in the chicken run; whilst I dug up clusters of nettles or brambles, they got in the way and gobbled up any worms and grubs. Life carried on like this until early autumn this year, when all three got ill. Two of them died, and one recovered. My speckled hens were fine, and totally unaffected by the illness. Presumably, after their tricky start in life the brown hens had a compromised immune system which meant they weren’t able to fend off illness as easily as the speckled hens.

A few weeks later, this Monday, the remaining hen also died. I was away at the time, and my neighbour was looking after her and the 2 speckled hens. Commercial laying hens are more prone to illnesses, and in particular are prone to forms of cancer and egg peritonitis. Their lives are often much shorter than their free-range, domestic peers.  I know that if I adopt some more, that they will probably die within a year or two as well, but that’s definitely not going to stop me – it has been such a rewarding journey, seeing these little girls claim their right to be a ‘proper’ chicken. I’m sad that they didn’t live longer, but I’m glad that they at least spent half their lives living the good life.