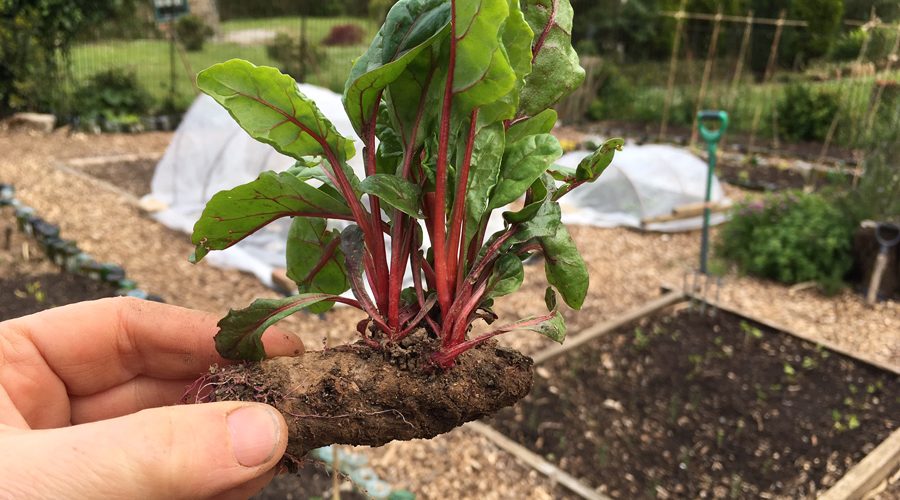 At the end of last summer, my veg patch looked amazing! I had marigolds, calendula, and borage adding colour, abundant displays of chives, a new crop of chard and kale planted up for the autumn, and I let some of my rocket and frills mustard flower (they have lovely little yellow flowers that the bees love!) It was glorious and I loved it.

This spring, I’ve seen quite a few return visitors… chives and marjoram have reseeded right across the garden, I’ve got rogue wild rocket and frills mustard plants popping up along the pathways and in other raised beds, and I’ve got an enormous number of calendula growing everywhere. All those beautiful flowers from last year went to seed, and I didn’t “deadhead” so nature took its course. I don’t mind this at all. I’ve pulled up a few from the paths, but actually I’ve left a lot of them dotted around the veg patch. I quite like it, and actually it’s given me the idea to dedicate one raised bed to a little “wild veg meadow” next year – I’m thinking that I could plant up a medley of rocket, frills mustard, calendula and so on and just let them self seed year after year. I might include some red veined sorrel there too (I hadn’t realised that sorrel is perennial, so it’s all popped back again this year!)

So yes, I love all these plants coming back, but I would advise anyone who likes to keep a very tidy plot with neat rows of veg to make sure you deadhead (pick off the dead flowerhead before the seeds spread) this summer!

Some rainbow chard also made an impressive comeback from a small piece of root that I evidently failed to pull up at the end of the season. The little shoots popped back quite well. They weren’t as tender as the newly planted chard, so definitely needed cooking down rather than being used in salads (actually, I ended up giving most of the leaves to the chickens who were delighted!) but I was quite inspired to see them putting in an appearance again!

As ever, I have “volunteer” potatoes popping up all over the place, from potatoes that I missed when I dug up last year’s crop. I don’t really mind this, but if you’re not keen then it’s definitely a good idea to grow potatoes in containers!