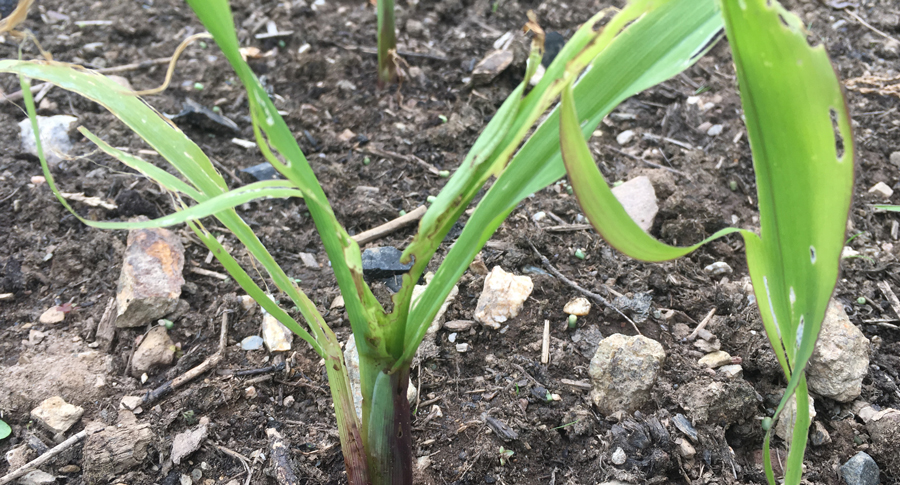 So I’ve had a fair bit of slug damage on my sweetcorn plants. No biggie, I put down some beer traps and did a wood-and-stone-lifting exercise to collect and remove lurking slugs and damage was minimised. But three or four of the plants just wouldn’t grow. I thought perhaps they were stunted for some reason. Or perhaps still suffering from the slugs. Then, one afternoon I was watering them, and, as I sometimes do being a bit of a weirdo, I had a little pep talk with one of the stunted ones. I got nice and close to the little plant and told it that he needed to do a bit more growing and that I was there to look after it.

Being so close to the plant, I then spotted something peeping out from the centre of the stem. It bobbed up and down a little bit waving its little green head around until I realised that it was a caterpillar. Mummy butterfly must have laid her egg on the sweetcorn plant and then when it hatched the caterpillar must have crawled into the safety of the leaves. It was perfectly camouflaged and protected from predators. Very clever. But not great for my sweetcorn. I checked the other stunted plants, and sure enough, they too had little caterpillars living inside them.

After removing them (as carefully as I could), I continued my pep talk and told the plants that they should be ok now. Several days on, and it seems that they are beginning to grow. I’m not entirely confident yet, but I’m hoping they will soon catch up.

Moral of the story? Talking to your plants is crucial!