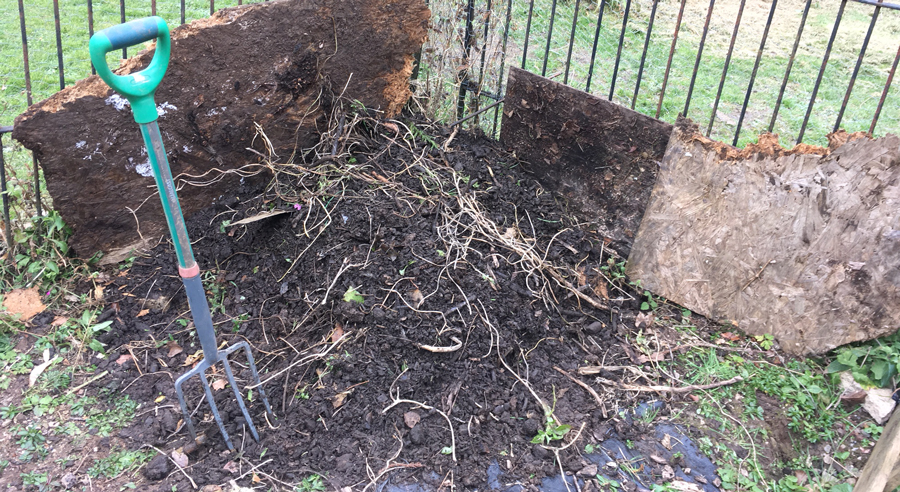 It may have been chilly over the weekend, but it was dry (almost unheard of lately, here in Cornwall) so I spent a good chunk of time out in the veg patch preparing for my new no-dig growing this spring. My main mission was to get a better compost heap on the go. If I’m going no dig, then I’m going to need a lot of the stuff, and as much as possible I’d like to provide it from the garden.

Because I’m a bit lazy, I decided against building an impressive compost bin using old pallets and instead have gone for the most simple approach. I’ve placed the compost heap in the corner of the garden (it’s enclosed by iron fencing) so as to keep some basic structure to the heap, and to stop the compost from spilling out onto the lawn I jammed a couple of old planks of chipboard against the fence. Then I just started gathering bits and bobs to throw onto the compost pile.

I actually can’t believe how quickly I built up a good sized pile just from clearing up a lot of debris from the veg patch and rest of the garden – dead rosemary plants, wood chipping from the pathway that had started to rot down, leaves from a plant I’d cut back, straw from the hen house, a pile of grass clippings from autumn, lots of broccoli and brussels sprouts stalks that I harvested recently – it all went on and I intend to keep adding to it for a couple more months. After that, I’ll leave it, turning it from time to time to get air back into it to help it break down faster. With luck I should have a decent amount of compost to use in the veg patch this time next year, and it should save me a fair bit of money. Meanwhile, once I stop adding to this pile I’ll get another on the go. My intention is to have 2 piles on the go at all times, one that will hopefully be ready in spring and another that is ready in autumn. Fingers crossed it works!

I did do a little bit of research beforehand and since I’m going no-dig, I turned to the guru of no-dig gardening, Charles Dowding, for some composting tips. I have to say, the man is a genius and he’s very no-nonsense. He put a few myths to bed for me – I am now putting weeds (roots and all), citrus, and all sorts of other things onto the compost heap. The only thing I won’t be doing is putting eggshells or cooked food onto it as these definitely (in my experience) attract rats. The much sought after balance between green (veg scraps, leaves etc) and brown (woody matter) compost material should come naturally as everything gets added, and I’ll be keeping an eye on it over time.

I really think it’s such a worthwhile exercise, even if you only have a very small garden (and those black compost bins don’t take up a huge amount of space), and makes so much sense in terms of putting things back into the earth, completing a very natural cycle.