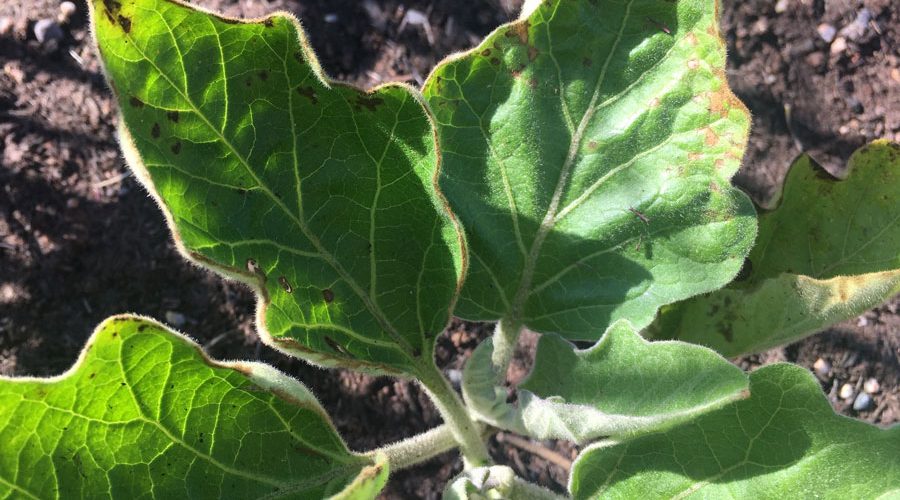 This is my 3rd attempt growing aubergines, and I was hoping it would be 3rd time lucky. In the first year my plants formed a few small fruits which sadly got devoured by woodlice (quite an odd pest, but they were living in holes in the aubergines!) and in the second year I got a few flowers, but never any fruits.

This year, I’ve divided my plants up – I plants half of them outside and half in the greenhouse. Needless to say, the ones in the greenhouse are growing much faster and look more healthy. The ones that are outside are growing slowly, and have slightly yellowing leaves as well as some kind of fungal infection – brown spots are appearing rapidly all over the foliage. I suspect they won’t reach the point of producing fruit. Bear in mind, they are growing in Cornwall, in a relatively exposed site – I imagine that if you were growing them up against a wall in the south-east where summer tends to be a bit hotter and less damp, you may have more luck than me!

In the greenhouse, things are looking more hopeful. The aubergine leaves are lovely and green and healthy looking, and they are growing a bit quicker too. However, we’re pretty much into August, and unfortunately that means that autumn is on its way, so the temperatures will be dropping, especially at night. I would have hoped that they’d started flowering by now, but they’re still in the leafy phase. So, I’ve decided to be quite ruthless in pruning them and feeding them a low nitrogen tomato feed to encourage fruit as opposed to leaves. I’m not sure how they will do, but I’m hoping that if I can get a few flowers and fruits to form by mid to late August they may be bountiful by the end of September. I will report back!