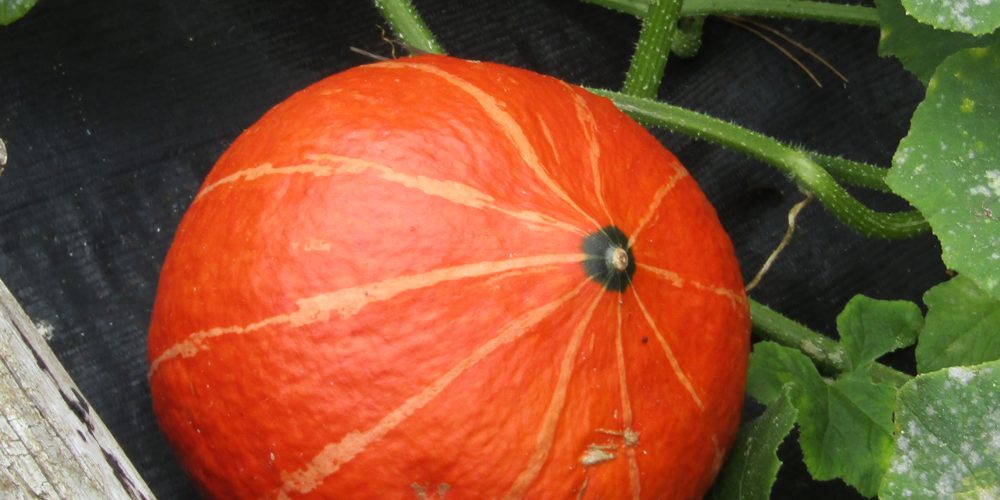 If you’re just starting out with a new plot, or if you’re trying to add some extra growing space this season, then we would highly recommend getting a pumpkin & squash patch on the go. It’s very easy, quick and a great way to clear weeds for future growing.

If you’re starting with an existing raised bed/plot, then jump to step 6 (or step 3 if it’s covered in weeds!)

Step 3 – Dig out any BIG weeds, like brambles or docks. Don’t worry about nettles and grass.

Step 4 – Cover the area with a layer of brown cardboard (tape/staples removed!) – the cardboard will prevent the weeds from continuing to grow, and will decompose into the soil by the end of the season.

Step 6 – Cover the bed/plot with a sheet of black polythene, securing it well at the edges. (At the end of the season you’ll be able to carefully pull up the polythene without leaving plastic behind)

Step 7 – Cut 10cm holes in the polythene at 1m intervals, and plant your pumpkin/squash plants in the holes.

You’ll be able to water into the holes, and the polythene will prevent moisture from evaporating so your plants shouldn’t get thirsty. At the same time, the polythene will keep the soil warm giving your pumpkins a good growth boost. The plants will soon sprawl out and hide the polythene from sight, and when fruits form you can rest assured that they will not be touching the soil and therefore unlikely to rot before they have ripened.

As your pumpkin patch is growing, the weeds underneath will be starved of light and will die off. At the end of the season (or at the start of the next) you can remove the polythene to reveal a weed-free plot/bed.